A payrise is essential for supermarket workers 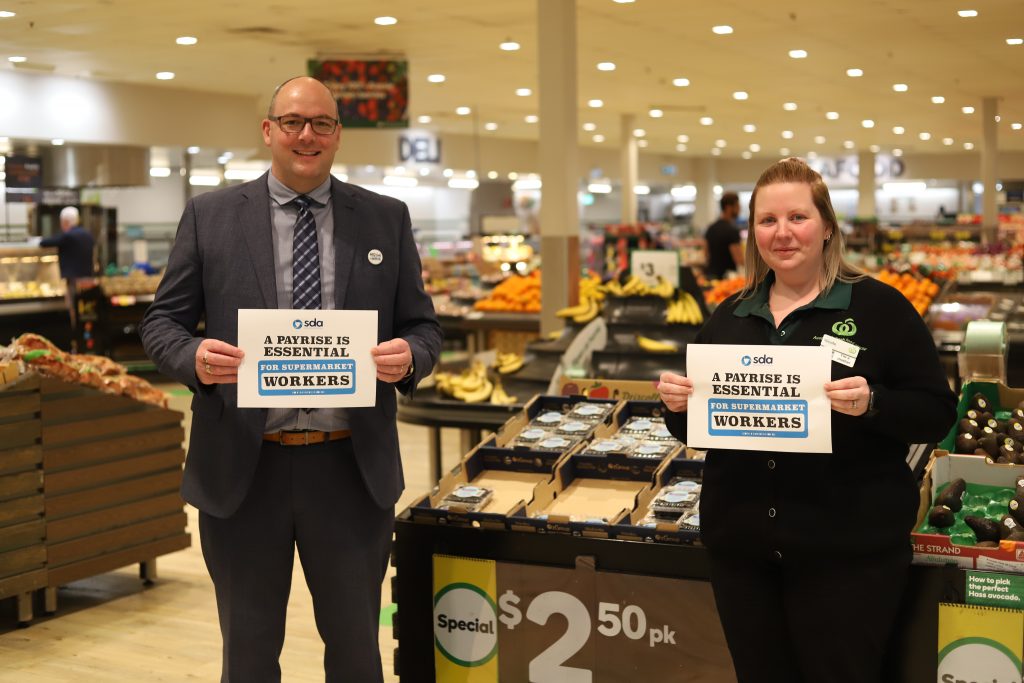 Since the Fair Work Commission handed down its National Wage Case Decision on 19 June, the SDA immediately commenced our ‘Essential Workers Deserve a Pay Rise’ campaign. Members are reminded that the FWC handed down a disappointing 1.75% wage increase, but for the first time, delayed the pay rise for Award-based retail and fast food workers until 1 February 2021. Also, increasing numbers of our Enterprise Agreements such as Woolworths retail and Coles retail have their wages and penalties determined by the Annual Wage and Modern Award Reviews.

This FWC decision was a smack in the face to our members who have been on the frontline during Covid-19 especially since they have copped emotional and physical abuse from the public. Quite clearly, our retail and fast food members are essential workers and who better to say this fact than Australia’s Prime Minister, Scott Morrison.

In a recent, video, Mr Morrison was invited by Mr Steven Cain, the Chief Executive Officer from the Coles Group to say a few words to Coles supermarket employees. Scott Morrison welcomed the opportunity and expressed his thanks to the Coles workforce. Some of what Mr Morrison said is as follows: “Thank you to the women and men of Coles. You have stepped up in these past few months in ways that we would normally expect from our health care workers and people working in emergency services. But there you have been showing the same courage, the same determination, the same culture of service and support to your fellow Australians. Everyone’s been under pressure but you’ve kept your cool. You’ve done your job; sometimes under great provocation. And of course it hasn’t been easy; but I’m grateful and I know the country is also grateful for what you’ve done and we’ll continue to do. You’ve shown the leadership that has been necessary in store as the occasions have presented before you and your response has been great. Throughout this pandemic, we’ve all learned what we rely on every day like our retail staff. So to all the Coles staff around Australia, thank you. What you’ve done has made a real difference in the life of so many in our country”.

After personally viewing the video, I echo the Prime Minister’s sentiments that retail workers are essential workers but I would go one step further. All retail workers and fast food workers have done an outstanding job during Covid-19 and their respective employers need to do more than verbalise their thanks. They need to pay their employees the 1.75% from 1 July, 2020 with backpay and not wait until 1 February, 2021.

The SDA is the only Union which stands up for retail, retail distribution and fast food workers. We are the only organisation that continually takes up the fight to the retailers and governments.
The first step of our Essential Workers Pay rise campaign has been to lobby the large supermarket chains such as Woolworths and Coles to pass on the 1.75% from 1 July. In fact, both companies would have budgeted for a 2% to 3% wage increase to be payable from 1 July.

To Woolworths credit, they have taken the decision at the corporate level to backpay their Woolworths supermarket and Big W employees from 1 July. This decision means that our Grade 1 members will be better of by at least $400 when compared to those workers whose companies choose not to backpay their employees.

On Friday, 18 September, Coles finally agreed to the principles of the SDA’s Essential Workers Pay Rise campaign. Thanks to campaigning by the SDA and SDA members, Coles agreed to pass on a 1.75% pay rise to waged team members from October 5, 2020.

It is great that Coles has done the right thing by paying a wage rise to its employees because it recognises that their team members have done an incredible job during Covid-19.

On behalf of the State Executive of the Union, I would like to express my gratitude to the thousands of SDA members and Shop Stewards who have supported this campaign. We couldn’t have won this pay rise without your loyalty and assistance.

Importantly, our campaign has not been confined to just Woolworths and Coles. We have been speaking to a number of companies and when we hear positive news, we will be notifying our members in those companies. Stay tuned.