NATHAN: I RECEIVED $3,375 IN ACCIDENT INSURANCE 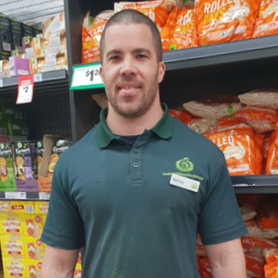 Nathan has been an SDA member since he started working at Woolworths some 13 years ago. Nathan joined the union because he always thought that it was the right thing to do. His philosophy is very straight forward. “If Woolies workers didn’t have the SDA, we’d be all worse off. We all get to enjoy four weeks annual leave, 17.5% leave loading, paid sick leave, health and safety, 9.5% super and workers’ comp. I think if we all get the benefits, then we should all contribute equally”.

Nathan has also liked the idea that the SDA also had a wide range of extra benefits. He knew this because he reads the SDA publications which are sent to his home address or via email. He also looks out for additional information which is posted on the SDA Noticeboard.

In October 2017, Nathan suffered an ACL injury while playing touch football. He was reminded by Sue Moore, SDA Recruiter for the Western District, that the union had an Accident Insurance Policy outside the times he was covered by workers’ compensation. Sue confirmed that Nathan should enquire further about the SDA’s FREE Accident Insurance Policy.

Sue rang the union office and Nathan subsequently spoke to Denise who handles the SDA’s enquiries. Denise encouraged Nathan to apply for a claim on the policy. Within a matter of weeks, Nathan received a cheque for $3,375 from the insurance company which helped pay for his physio and gym which was so important for his recovery.

Given that Nathan was off work for 12 weeks, the money came at the right time. Thankfully, the operation was a complete success; he has been given a full clearance and his leg is going well.

Nathan joined the SDA because he believed in the work of the Union. He‘s also glad he did because he learned first hand that the SDA looks after its members both inside and outside the workplace.

His message to non-members: “Join the SDA, YOU’LL NEVER REGRET IT”.