PAID CAR PARKING, WHAT A RIP OFF! 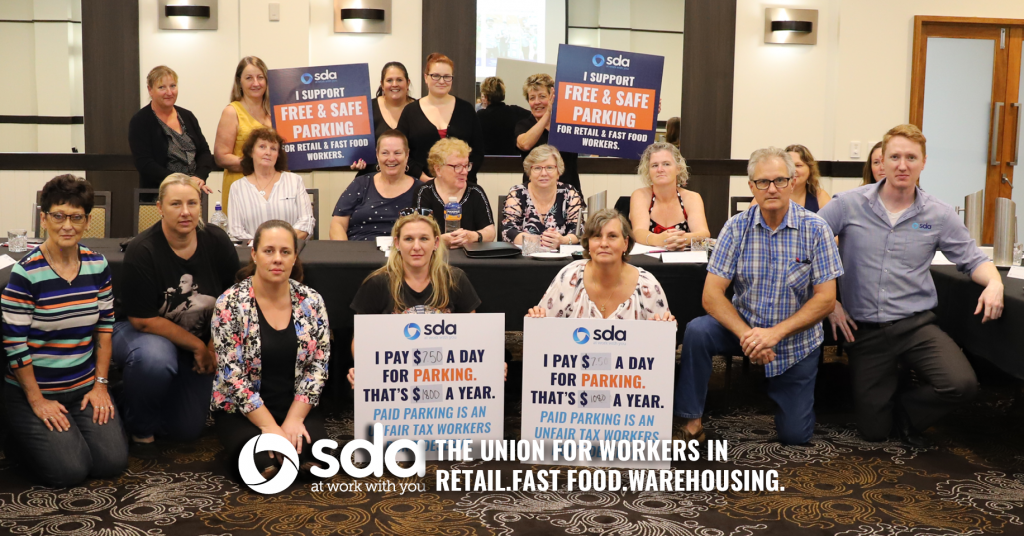 The SDA recently conducted a training course for our Shop Stewards in the Toowoomba/Western Area. 19 Stewards attended and the issues which were discussed included the No One Deserves A Serve campaign, issue resolution, enterprise bargaining, health and safety, workers’ compensation changes, superannuation and underpayments.

We of course ran an open session and the two hot issues which emerged were paid car parking and the importance of recruiting new members to keep the Union strong.

Safe and Free car parking featured strongly in the open session and it emerged very quickly that paid car parking is a hot issue particularly for those who work in Toowoomba.

During the open session we learned that two attendees had been drastically affected by the exorbitant fees charged at the Grand Central shopping centre in Toowoomba.

Lola Waters works at Big W Grand Central Toowoomba and has now sold her car due to the cost of parking her car at Grand Central. The annual cost was some $1,800 which is unsustainable on a retail worker’s wage. She now walks to work and has to contend with the vagaries of Toowoomba’s weather. Lola is lucky in that she lives close to work but some of her work colleagues have to drive given the distances they live from work.

Do the sums. If Lola takes home $36,000 each year, she has to pay 5% of her net income for the privilege of going to work. This is a disgrace! Without retail workers like Lola, Grand Central would be forced to close.

The other issue is the safety of the car park. Quite frankly, it can be scary. The carpark on the roof has no cameras and security take too long to escort members back to their cars.
Joanne Edgerton works at Woolworths Grand Central. Joanne has recently come off working nights and now works 7am to midday. She works 4 days a week including Sunday but still needs to pay car parking for three days. Joanne is particularly annoyed that patrons have to pay from 7am even though the centre does not open until 9am.

There is no transport hub at Grand Central and public transport is inadequate and unreliable. For the privilege of going to work, Joanne is paying $1,080 and more if she has the opportunity to work additional shifts. Other staff members take the risk of parking in the streets because it is cheaper. This poses further and unnecessary safety risks for our members which is totally unacceptable.

There are only two possibilities:

The State Government decides that retail workers are the most important cog in the retail industry. They secondly recognise that retail workers are not millionaires and cannot afford parking fees. In fact, most of our members live week-to-week as they are struggling financially. As such, the Palaczuzuk government needs to support SDA members by legislating to have FREE and SAFE car parking before the next state election. C’mon Premier, we know you can do it!

During the Coronavirus, most shopping centre car parks ceased or modified car parking fees for staff and customers. These centres include Westfield Chermside, Garden City, Indooroopilly and Coomera, Australia Fair and others.