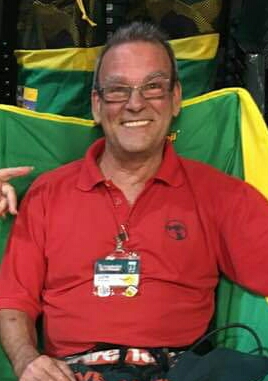 I had the pleasure of training Llew over the last two years and it was with great sadness that I learned about the passing of Llew on 22 October. Llew worked at Bunnings Carseldine and was a Shop Steward of the highest calibre. It did not take me long to establish that Llew was there because he cared so much for his co-workers; he took his role as a Shop Steward very seriously and took on all the responsibilities. He wanted as much knowledge as possible so he could help his members the best way he could. He spoke highly of Bunnings and enjoyed going to work. He just wanted everyone to work together and consider others so as to make it a great workplace for all. He was also very passionate on mental health in the workplace.

Llew is survived by his loving partner, Kerry and his children. Llew was passionate about his fishing and joined Bunnings after leaving the army.

There was a sea of red at the funeral and Llew was given a very moving Bunnings guard of honour after the service.

Llew touched many lives including those of his friend and fellow Shop Steward, Jeremy Young from Bunnings Stafford.

Jeremy commented, “When I left Carseldine Bunnings and moved over to Stafford, in time Llew took over my role as Shop Steward. He worked alongside with fellow Shop Steward at the time Glen. I was very proud that my position was filled by a person of Llew’s integrity. In time, Llew took over the role as the Senior Shop Steward as Glen retired from the position. I would often meet up and sit alongside Llew at SDA meetings in the City. We would swap notes on various Union issues and also discuss how each of our stores was going. Lew was a brilliant Shop Steward; he displayed great knowledge of our EBA and he negotiated very well on behalf of his fellow Team Members. He also advised his Team with correct procedures and also had a very good working relationship with the Leadership Team.”

In one, Llew was admired, respected and also was well loved by all of the Carseldine Bunnings Team. I will miss him greatly. He was in all a good bloke and an honest caring Bunnings man”.

Ian Halliday, SDA Shop Steward Bunnings Carseldine added these sentiments, “I always remembered Llew in the store as a good listener (his eyes always looked over his glasses and that’s when you knew you had his attention) and he always called it for what it was.”

Llew, you will always be remembered.