THE SDA GETS THE JOB DONE AT COLES HEATHWOOD DC 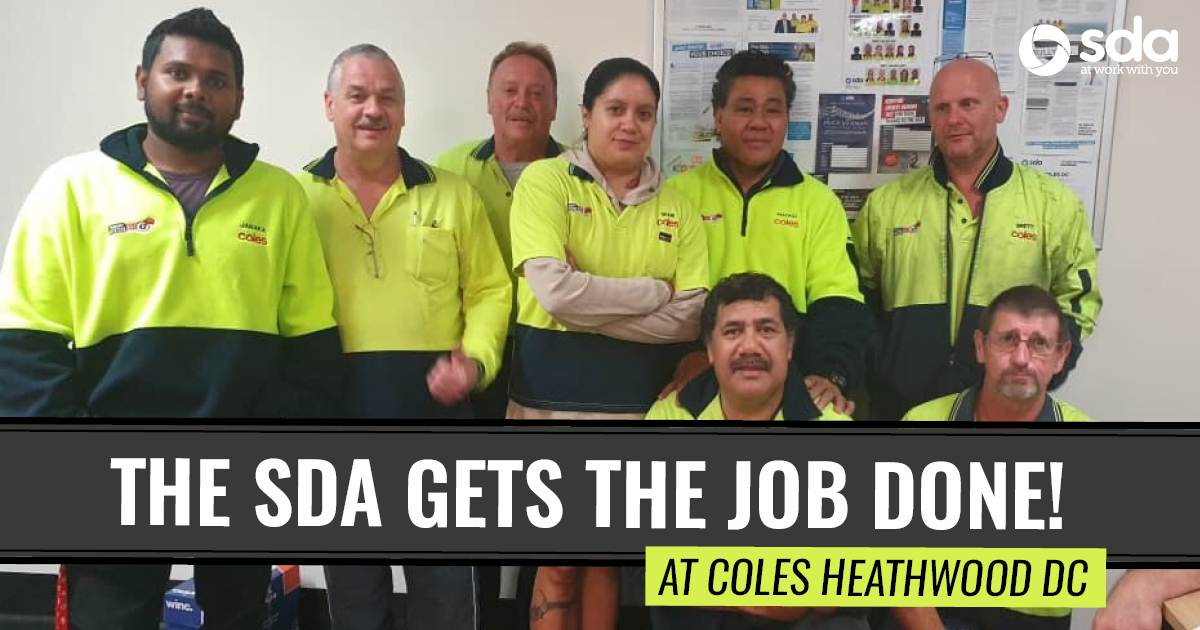 Outcome of the dispute

Lessons of the dispute

What SDA members have to say:

“I was advised by the company that the Heathwood afternoon shift would close at the end of June 2019. I rang the SDA straight away to get their help as I knew the closure would impact our members financially and would also impact upon their family responsibilities.

“The SDA didn’t waste time putting out propaganda; they got on with the job of fixing the issues. They got the job done by resolving the issues to the satisfaction of each individual member.

“I know the SDA will look after the members in this turbulent time over the coming years.

“The SDA and their Organisers have always been up front and honest with me. They have always told me the truth and that’s what we need from our union. We want honest and truthful information and not false information that plays on our emotions.

“The SDA delivered on all counts. – Jodie Duff, SDA Delegate

“When I was told that the shift would close, I was in total shock. Before long, I quickly worked out that I would lose about $11,000 if I was forced to work day shift which the company offered. I never doubted that the SDA would fight for us. After all, in 20 plus years, they have achieved amazing wages and conditions. We work under one of the best EBAs in Australia in retail warehousing.

“This closure was very real for all of us. The SDA became involved and fought for us and achieved an amazing outcome. They never sold false hope. The SDA and its Delegates were courteous and respectful of the needs of its members. They understood the importance of maintaining our work/life balance and attaining a positive outcome during a very difficult time.
– Nigel Henderson, SDA Member for 20 years

“Once I was told by the company that I would be forced into a shift change and the loss of $11,000 in shift loading, I rang the SDA. The SDA acted immediately and spoke with the company. They achieved the best outcome for my family and me. Due to the SDA’s involvement, I am no longer going to lose my shift loading and I can remain working afternoon shift hours.

“I have been a member with the SDA for 19 years and they have always looked after me in the past, currently and in the future. I have no interest in leaving the SDA just to try another union. The SDA is the best Union to serve my interest.

“If you’re not with the SDA, I would encourage you to join now. – Aleleai Matagi, SDA Member

“I have been an SDA member for over 14 years. The SDA has served me well, from decent pay rises, to better working conditions, to general advice on super, sick leave and leave of absences.

“The SDA assisted me during the afternoon shift closure. They secured my first preference!

“I don’t need to try another union; the SDA is the only Union that has served me well over the past 14 odd years and they will continue delivering and protecting my interests.

“If you’re not with the SDA union, you are selling yourself short, and you are at risk missing out which can cost you dearly.
– Ged Leigh, SDA member

“When I was advised of the afternoon shift closure, I was concerned at the amount of money I was going to lose – a minimum of $11,000.
I was told by the company I basically had two options – take a pay cut and go to a shift I found unsuitable for my family life, or leave the company by taking a voluntary redundancy. Both options totally disadvantaged me and were not acceptable. The only real option I had was to turn to the SDA union.

“I contacted the SDA which I have been a member for over 24 years. The Union was totally professional and secured the best outcome for me. I am now working the exactly same shift at Forest Lake, working the same role and earning the same money.

“The SDA did an amazing job and I wouldn’t be working here without the SDA. When it mattered, the SDA was here to support me and achieve the best outcome. – Brett Carpenter, SDA member

“I have been an SDA member for many years. Once the announcement came that the afternoon shift was closing, I considered my position. I spoke with the SDA Organisers who were helpful and provided honest and correct information to me throughout the process.

“I have decided to leave the company. The SDA have always served me during my years of service with Coles and I encourage any of my mates that are remaining at Coles to join the SDA and be part of the only union that puts you first and delivers real outcomes in the best interest of their members. – Kashari Herbert, SDA member

“I have been a member of the SDA for several years. Every time I have needed the SDA, they have been here for me. The SDA’s advice is always spot on.

“During the closure of the afternoon shift, I was reminded of the importance of being in an honest, truthful and majority union.
I say if you’re not in the SDA, you need to join today; otherwise, you will be caught without the professional help if the time arises when you need assistance. – Nathanael Leota, SDA member