Woolworths and Target on board with No One Deserves a Serve

January 28, 2020 News No One Deserves A Serve Woolworths

In late 2017, the SDA commenced our internationally acclaimed No One Deserves A Serve Campaign throughout Australia.

The campaign has had its ebbs and flows and the major reason for this is that the SDA, as the union which represents retail and fast food workers, challenged the long held employer view that ‘the customer is always right’. We fully understand that the level of customers and the money they spend determines to some extent the number of staff and the amount of hours that our members are employed. However, this does not give customers the right to abuse our hard-working members.

We are slowly moving away from the days when vindictive customers were rewarded with gift vouchers and the like. Of course, this practice must stop immediately as it rewards those nasty customers. It is pleasing that the vast majority of store managers has come on board and now accepts the fact that customers can be rude, can be angry and can become violent towards retail and fast food workers.

The SDA challenged the employers in our industries to show leadership on this important issue. As part of our round table discussions with the employers, we advised the companies that our members clearly wanted signage in their workplaces stating that abuse and violence towards staff will not be tolerated in this workplace.

At Woolworths Darra, the company demonstrated their support for their staff by displaying a sign which reads ‘Please treat our team with respect’. It is our understanding that this signage will be rolled out in their stores throughout Australia.

The SDA welcomes this important recognition by Woolworths that abusive and violent customer behaviour must be eradicated as they take steps to positively and publicly promote and support a culture of respect and dignity for workers. Target has also recently rolled-out signs in their stores encouraging customers to respect their staff.

All reports indicate that the customers have welcomed the signage because many have witnessed first hand the abuse and violence directed towards the staff and secondly, they want their shopping experience to be stress free. 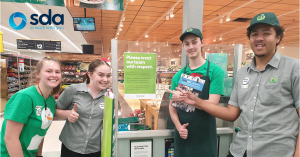 SDA Members with a customer respect sign at Woolworths

This particular photo was posted on the SDA’s Facebook page, Instagram and the SDA website. The different forums went into overdrive. For example, Woolworths’ members were delighted. Coles’ members said “if it’s good enough for Woolies, it’s good enough for Coles”. McDonald’s members expressed their frustration with their company. They wanted their company to take their head out of the sand and acknowledge that their team has copped a lot of abuse from customers particularly after dark. Other feedback simply said that, “all stores need something like this”.

All feedback was positive and it demonstrates that the NODAS campaign has been well received by the SDA membership and the customers. It is very clear that our members want to work in a safe and healthy workplace and customers want to shop or eat in a safe environment.

Finally, Woolworths and Target have taken the first step. I look forward to other retailers and fast food companies coming on board. After all, your staff are your greatest asset!